Rainier Square Tower is set to form a striking new addition to the Seattle skyline with an instantly iconic and bold form conceived by architects NBBJ. At 259 metres (850 feet) in height, the tower is the tallest building project undertaken in Seattle since 1985 and, once completed, will be the second tallest building in the city overall. The mixed use building will encompass a hotel spanning 12 storeys, office space covering 750,000 square feet, 30,000 square feet of retail space and approximately 200 luxury apartment homes.

The most noteworthy aspect of the building, however, is surely its unique architectural form with a dramatically curving shape formed by multiple steps, rising up from a relatively wide base a negatively sloping ‘carve’ swoops inwards to achieve a progressively slimmer shape at the higher levels. The East facade also features a complementary positive slope starting from the level 40 Sky Lobby. The facade itself is constructed from glass with numerous aluminium protrusions.

CoxGomyl’s experienced design team therefore developed a new facade access solution which would deliver comprehensive coverage of 100% of the facade with just a single crane-type Building Maintenance Unit (BMU). From a fixed position above the main roof area at level 60, we were able to demonstrate that a highly manoeuvrable BMU was capable of accessing the entire tower whilst achieving a remarkably compact profile when not in use. The functionality required to realise this concept includes a five stage telescopic jib which provides a maximum outreach of 48 metres. In addition a pantographic mast design which, powered by hydraulic cylinders, allows the mast to rise and fall between parked and operating positions. 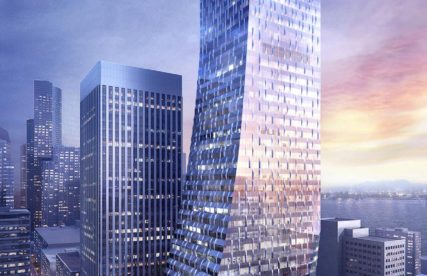 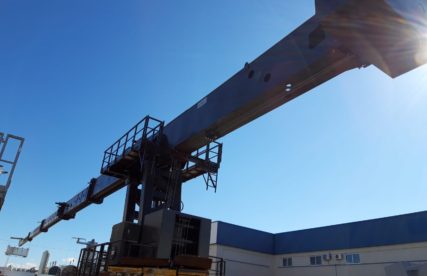