The One Oxford Centre is one of the most recognisable structures of the Downtown Pittsburgh area of Pennsylvania. Constructed in 1983, the 187-metre-tall building is home to a collection of commercial businesses and high-end retailers. Uniquely, the building features a glowing effect that is said to be greater than any other high-rise in the country, created by forty-three 1,500-watt spotlights which illuminate the building using 54,500 watts of energy. Recently, sophisticated upgrades were made to common areas and amenities of the building, designed to appeal to progressive and modern technology firms.

CoxGomyl, leaders in premium facade access solutions, were approached by the client who were searching for a modern facade access system to replace the existing basic access solution consisting of four twin arm rolling davit units which dated back to the buildings construction in the 1980’s. CoxGomyl delivered a fit for purpose replacement facade access solution that utilised a creative method of installation that best suited the challenges of the established building.

Architecturally, the building was designed by Hellmuth, Obata and Kassabaum to create the perception of four separate towers, each with its own roof area. CoxGomyl provided four twin jib building maintenance units, one for each of these roof terraces, each with the ability to travel along the outer edge of the roof along a track system. Each of these identical units were able to achieve an outreach of 1.9 metres.

The challenge with the provision of these BMUs was calculating how to utilise the existing ISA anchors which were located on different points of each terrace. CoxGomyl were required to design the cradle to ensure that regardless of the anchor location, complete coverage of the relevant side of the building could be achieved.

Likewise, the congested nature of the mature city required a creative installation method for each unit which weighed more than 6 tonnes. CoxGomyl were required to utilise an air crane, which required very detailed coordination with the city to ensure public safety of all neighbours. It was also essential that the installation team could safely land each unit on the small flange twin track system safely. 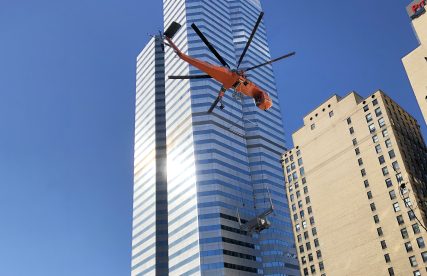 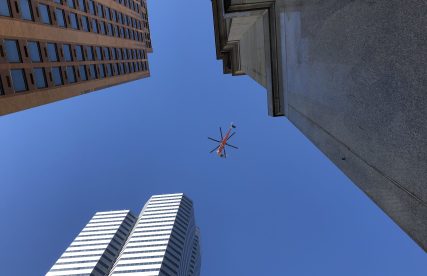