The Nanjing International Youth Cultural Centre is located in the west of Nanjing Jianye Business District positioned along the banks of the Yangtze River.

The development rises as twin towers of varying heights from a shared podium containing a large conference centre, concert hall and contains a 5 star hotel and space for commercial offices. The Centre was opened in 2014 for the Youth Olympic Games held in Nanjing. Inside the podium, interior spaces are sculpted with a fluid design theme that is reinforced with lighting placed in a series of diamond shaped openings of various sizes and repeated throughout the structure. The design concept is then also translated to the exterior where an architectural weave can be seen throughout the complex.

The facade is composed of a complex mix of glass curtain wall panels, glass-fiber reinforced concrete (GFRC) and perforated aluminum panels. The facade also has a series of diamond shapes of varying sizes which form a pattern that turns vertically to ascend the towers and unify them with the base structure. The tower exteriors have a similar theme with curved lines transitioning up the vertical lengths to the top. LED lights are embedded into the facade to create an impressive exterior light display at night.

CoxGomyl provided a customised solution that addressed each of these structural challenges, one of which incorporated safety measures and minimisation to the impact on the appearance of the building.

Four Building Maintenance Units were installed on the roof, consisting of two separate models. As the roofline extended far from the outline of the facade, there was a requirement for an outreach of the jib to extend to 43m. The other two BMU’s are fitted with two stage elevating inserts and telescoping jibs.

There was also the additional challenge of limited space to overcome, as one of the BMUs had to be hidden from sight below a helipad which created limited space.

As always CoxGomyl’s engineering and manufacturing team rose to the challenge with a unique solution. 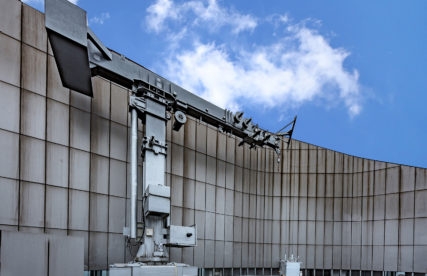 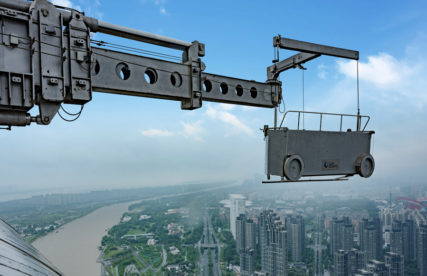 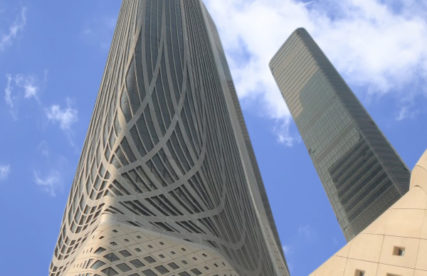