CoxGomyl are proud to have been selected to deliver the facade access system for this inspiring construction project on Hengqin Island in Zhuhai.

A major part of the Pearl River Delta mega-region, Hengqin International Finance Centre is a physical embodiment of the exciting energy and ambition of this area and its development into a major global financial centre. The tower will function as a focal point for the growing central business district. As it rises majestically 336.7 metres into the sky, the tower splits into four distinct peaks that soar up from the podium at the base. This is designed to symbolise the convergence of the major cities within the Pearl River Delta: Zhuhai, Macau, Hong Kong, and Shenzhen.

The building design is by international practice Aedas, who are well-known for highly expressive architectural forms, and the concept goes deeper than representing the four metropolises in the region. They drew inspiration from a historic painting dating back to the thirteenth century Southern Sung Dynasty and, more importantly, the rich symbolism behind it. ‘Nine Dragons’ depicts mythological Chinese creatures known as flood dragons which emerge commandingly from the sea. In ancient Chinese literature these magical creatures are capable of invoking storms and are often used to represent an emerging power. This is an eloquent expression of the confidence and drive in this developing financial region as the building, like the dragons, rises from the waterfront. The project has been recognised and honoured as the most recent winner for architectural design by the AAP Architecture Prize.

Beginning at ground level, the base of the building features a retail podium comprising conference, commercial and exhibition facilities where a huge canopy envelops the building entrance and sweeps upward. In order to smoothly blend the connection between the retail podium and the tower above, the designers have transferred from the podium roof to the vertical elements in a single, fluid motion without an abrupt, jarring transition. As the tower rises to the four summits they twist and undulate, appearing to weave around one another and the roofline of each section is slanted towards the centre. All these elements further contribute to the powerful imagery of the dragons and the four cities converging.

Effective maintenance of this landmark building will be essential to its role as a focal point and an inspiration to the people shaping this emerging financial centre. The facades are clad in glass and metal panels, with the twisting forms and fluid lines presenting challenges for the facade access system. CoxGomyl have risen to these challenges with four identical 5000 Series Building Maintenance Units. These highly versatile and adaptable BMUs will be installed on each of the four corners of the roof, hidden underneath the helipad. In order to ensure full access to every part of the unique facade all the access solutions provide telescopic jibs, telescopic masts and soft-rope systems which allow the cradle to move horizontally whilst remaining securely restrained. For panel repair and replacement tasks, each BMU is equipped with a 450kg capacity glass handling unit.

This pioneering development not only pushes the boundaries of what is possible technically, but the stunning architectural concept and execution is among those that raise building design to the level of visual poetry. As the world leader in facade access, CoxGomyl has been entrusted with delivering solutions to maintain the pristine condition and architectural integrity of this inspirational building. 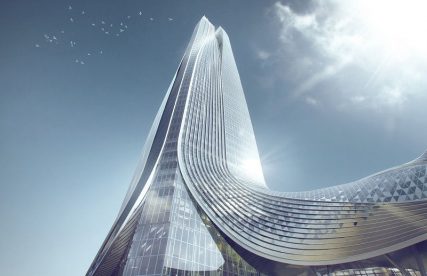 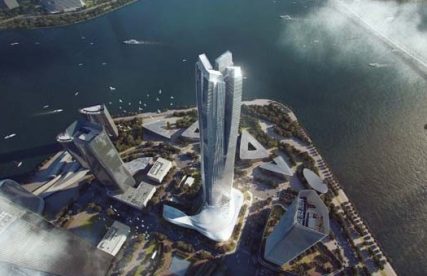