The Goods Shed, formerly a railway freight shed in the old Spencer Street rail yards, reflects Collins Square’s commitment to innovation and sustainability. Through insulation, double glazing and rainwater harvesting this historic treasure has emerged as one of the oldest heritage buildings in Australia to achieve a 5 Green Star rating.

The five towers pride themselves on the crisp facade lines. The top portion of Tower 2 is crowned in an angular glass “box” with a pink hue. Tower 5 features a slanted roof and an architectural spiral which runs down the length of the building.

Brookfield Multiplex approached CoxGomyl to provide a design and construct solution to access all facades of the building. CoxGomyl’s solution consisted of a range of 5000 and 7000 series BMU’s and monorail systems.

Many solutions were considered with the main difficulty being the shift in floor plan for the floors below level 27. This change results in the facade stepping in on two of the four elevations. To access the facade below this step, the BMU cradle had to reach in towards the building underneath this step in the building. For the elevations without the step, the BMU also works to replace glass with a dedicated glass-changing hoist built into the BMU.

To change glass to the areas below this step in, a monorail system was installed to the underside of the ceiling at Level 27. A winch lifts a glass panel from the ground with support from the operators in the cradle and the panel is moved to the replacement location where the BMU operators install it. The BMU travels around the roof area on a steel twin track system much like a railway track, this then guides and stabilises the machine. The BMUs distinguishing feature is the special cradle (Self Approaching Mechanism Cradle). The cradle is equipped with a scissor type mechanism and stabilising counterweight.

The operators initially descend the facade from roof level with the cradle in the collapsed position. Once they have passed the step in, the cradle system is opened, effectively reaching in underneath the step and providing access to the facade below this step in. 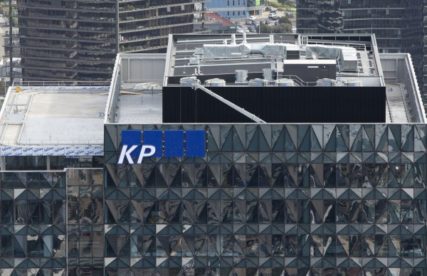 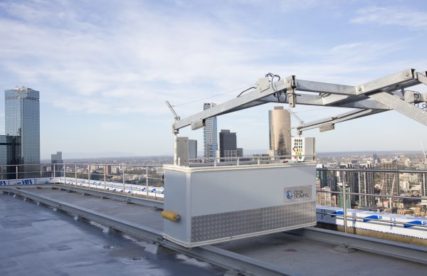 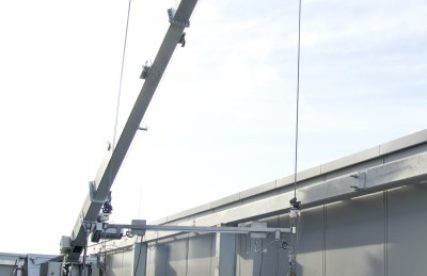 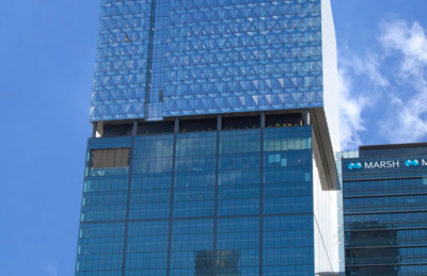