CoxGomyl’s reliable, high-quality facade access systems can be found in daily use at many of the most famous landmark buildings all over the world. However, no other project exceeds the cultural and social importance of the new One World Trade Center in New York.

This new iconic landmark on the famous New York City skyline represents a stunning achievement in several areas. In terms of sheer scale, One World Trade Center is the tallest building in the USA and the entire Western Hemisphere, towering 541 meters over the bustling city streets and well exceeding super-tall status. Given the sensitive history of the World Trade Center site, this was also a highly emotive and poignant redevelopment project which needed to provide high-end office space for business and commerce but also stand as a fitting monument for New York itself and provide the city with a renewed sense of optimism. Therefore, the stakeholders involved extended beyond the architects, developers, and construction companies to the government and the people of New York.

The building design by Skidmore, Owings & Merrill (SOM) was conceived as a strikingly bold monument with clean lines creating a deceptively simple aesthetic. The tower features a strong geometric form with gently tapering corners presenting inward tilting facade surfaces. The prism-like shape is also intended to interact with natural light, constantly changing the experience of looking at the building. All of these factors made effective building access systems a vital consideration. The project was significantly complicated by installing all Building Maintenance Units without the use of tower cranes.

Working closely with a wide range of stakeholders, CoxGomyl’s expert team developed a unique facade access system that would meet all of the practical access needs while also overcoming the challenges involved during installation.

While initially, it appeared that carrying parts up the elevator and rolling them into the exact BMU locations would be viable, further inspections and planning indicated that supporting steel structures located on the roof prevented CoxGomyl technicians from maneuvering parts. This challenge saw a series of custom-designed rolling hoists commissioned, each of which transported BMU components in mid-air around the building by utilizing pre-existing BMU tracks. Notably, each rolling hoist consisted of a sophisticated dual hoist system to provide added security in the unlikely case of failure.  In addition, the team was required to ensure every individual component weighed less than 6000lbs (2721kg) and fit the dimensions of the elevator system for initial transportation.

As a result, a high level of functionality and maneuverability is provided by four BMUs in fixed positions with dual knuckle slewing rings.

One World Trade Center has been widely celebrated by both local New Yorkers and the wider world. Thanks to the problem-solving ability of CoxGomyl’s expert design and engineering team, it will stand as a proud glistening icon of the city for many years to come. 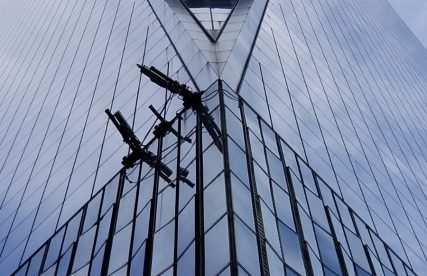 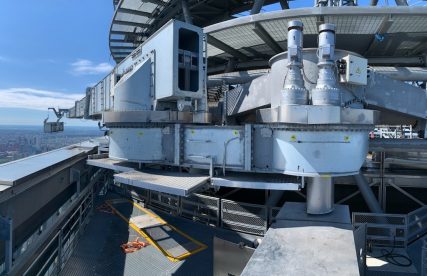 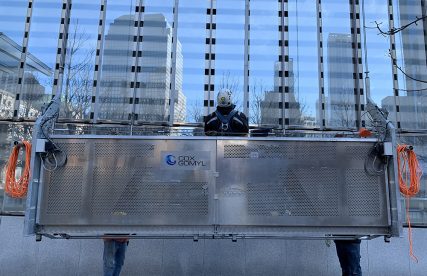